A downloadable game for Windows

It's an mock-up of an 80s adventure game. Like the LucasArts or Sierra On-Line stuff. Love that shit!

In this, you follow two close buds, Rake Speil and Violet Crapple, as they explore Rake's sublime abode. This is a total prototype. Also share this with your friends if you like it because I want people to enjoy my art!

"In That Citizen, you are expected to explore the ardently interesting home of main character "Rake Speil." Through highly stylized assets developed from original photographs, to the originally composed loop of background music playing throughout the house that effectively sets the tone of the game, to the Clockwork Orange-esque dialogue sequences between the characters in the game, That Citizen sets out for itself a feeling both original and reminiscent of older adventure games from the late 20th century." -myself, on a resume once

I went around to a few houses I know in south-east Pennsylvania and photographed rooms in them. Then I dressed up my friends, Luca Morante (Rake Speil), Binglun Shao (Violet Crapple), Nicholas Gordon (Jabba Sababa), and Feyzanur Kilic (Mudda Speil), and photographed all of them. They were lovely models.

I put those things in to Photoshop and just like... messed around with the pictures until I liked how they looked for the game. You can see that Jabba and Violet in the beginning sequence seem as realistic as the photographs, but they're the only example of that. Everything else is pixelized, edited, and saturated (including the tumult!).

I made the music in garage band, just trying to piece together a song that could set the mood. I think the track's name is, "Basement Rumble." Still working on that but it's catchy.

I did this as an art project for my senior art class thesis in High School. When I told my teacher that I wanted to make a video game for my thesis, he was like, "Okay, Abby, but I can't help you with programming." And he didn't, I figured out Game Maker Studio 2 on my own. It was a really cool experience to see how much I could push myself to learn something new.

Yeah! The first build for this game, and the one I turned in for a grade, was built in about 2 months while I was in high school. A lot of thinking time was outside of that... ie. thinking deeply about the aesthetics of the game and the scope of the game, who the characters were and how focused thematically I should stay. But in Game Maker I spent about 100 hours (probably a good 30 of those are Game Maker open idly in the background) and in Photoshop I probably spend 50 hours making the assets. Thank god I got an A+ for the grade or I would have rioted.

Anyway this was a super cool "first game." Like I've made other stuff but I'm honestly only associating my artistic self with this as my first work.

If you hover over something and an icon appears, click on it to get the dialogue box. Press space to cycle through dialogue.

The Beginning, with Jabba Sababa and Violet Crapple: Keep pressing space and cycling through the dialogue until you get to the basement.

You're in the basement. Throughout the game, not just now, make sure to click on everything that prompts you to. You have two options: go to the kitchen, or go to the other side of the basement. To get to the other side of the basement, hover your mouse on the right edge of the screen past the Television until you see an arrow icon appear for the mouse. To get to the kitchen, click on the stairs. An arrow icon will also appear here. This is constant for all pathways between rooms.

If you go to the other side of the basement, you will encounter a door that says "art is in here." Enter the door. This will bring you to the Mudda's art room. Click on the closet door. Note that it does not open. You may or may not click on the lizard-horse thing. Its name is Velveto. This will come back later. If you do click on it, it will occupy one of the black spaces in the top right of the screen. Go back to the main basement by clicking on the left side of the screen, then once you see the door again by clicking on either the left or right edge of the screen.

Now, we are going to assume you went to the kitchen. The rest of the basement will come back later. Mudda talks to you. Rake says he wants desaturated tumult. This is found in the fridge. When you click on the fridge, Mudda yells at you and tells you to talk to her again. When you talk to her again, she says that she wants her "scratch em up." You may try to leave the room, either to the hallway, which is accessed by hovering the mouse over the bottom left of the screen until the arrow appears, or to the basement, which is accessed by hovering your mouse near the door, right of the fridge, in the back left of the kitchen. You are kept from the hallway until Rake gets his Desaturated Tumult, so you must go to the basement.

Go back to the basement, and then click on the couch. This puzzle is figured out by understanding the relationship between Rake's reaction to the television static and Mudda's mention that she was "relating to the television." It may be difficult to figure out. Once you have the Scratch Em' Up, it will appear in one of the black boxes in the top right of the screen.

Go back to the kitchen and give Mudda Speil the Scratch Em' Up. She will now let you in to the fridge to get the Desaturated Tumult.  Now you may go in to the hallway.

Go to the yard. See that the shed is locked. Is this not intriguing? Note the hose, stare at the clouds, leave the yard by clicking on the bottom of the screen when the arrow appears. Go back to the porch and then the hallway. Then, go to Rake's Room.

In Rake's Room, click on the cat (she is in fact my cat in real life!). Her name is Scarletina. Click on the bookshelf in the back of the room, to the left of the recliner. This will prompt a dialogue between Rake and Violet talking about how Scarletina sits upon it like a queen adorning her throne. Leave Rake's room, go to the bathroom.

In the bathroom, click on the light switch. This will bring you to the alternate bathroom. Read the message, "Velveto must ascend the throne." Go back to Rake's Room, and have Velveto ascend Scareltina's throne. A ladder will appear. Go up it. You are now in the shed.

Where could that noise be coming from? Spoiler, it's coming from Mudda's Art Room. Go there and click on the closet. You have found Jabba. Congratulations!

The game is over.

This game is Windows-only. You will download it and it will install automatically, because GameMaker's a G. 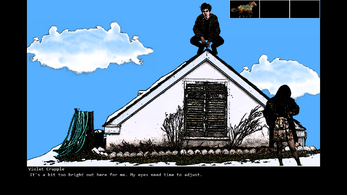 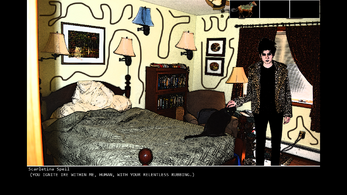 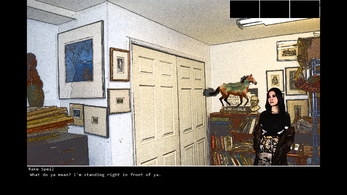