In this game you smash nuts, they loom over you as you face eternity, eternity.  God. Is this what food is now?

To hear the music you may need to click in the game screen.

This was devved in one week. I made everything except: the metal hitting sounds, the nut crunching sound, and the pixel shader on the camera.

the nut smashing sound was exquisitely curated. I will be recommending this to friends and family.

This game is absolutely bizarre in the best way possible. Very simple and honestly a little addicting. The visual style and audio design go really well together and mixed with the concept it's just absolutely delightful.

My one thing concern is mainly about what causes the hammer to move and change speed and everything. I couldn't recognize any real pattern and while it does add to the chaotic nature of the game it would have been interesting to see it a little more controlled by the player, perhaps by how many nuts they have smashed.

well done, big fan of the format and the particles... I think my only note is that the miss / metal impact sound should be more humiliating

Abby! Whatever inspired you to make this game, I'm so glad it did. The visual identity of this game is so clear and I love the oddness that it has. The ending was super unexpected but I'm actually glad it has one. It adds a nice wrap up to the experience and gives it a sense of completion. In terms of gameplay, the feeling of impact when you smash the nuts is very satisfying and makes it easy to keep playing. The fact that the crushed nuts line up behind the hammer in a grid of your successes against the nuts that be is also very nice and adds a nice feeling of progress. One issue I did run into though, was that the hammer sometimes zooms across the belt, making it kinda hard to hit the nuts at certain points, but I guess one could argue that just adds difficulty to the game. Overall, great work!

Omg Abby, when you told me the name of the game, I didn't fully know what to expect in terms of gameplay, but this is amazing. Very satisfying to just continuously smash nuts. It has a peaceful feeling that not a lot of one button games do. It also feels great to see the visualization of all the nuts you've smashed just keep expanding.

An incredibly small nitpick that I have is that sometimes, while moving right to left, my hammer would move at around the same speed as the conveyor belt, which meant that I wasn't able to it anything for that short period of time. It's not a huge deal, but it was so satisfying to continuously smash nuts, that it did suck when I was taken out of that loop.

Still, that is such a tiny nitpick on an otherwise amazing game. Very cathartic to destroy the things that can kill me :) Great job!

I've been playing this game for like 45 minutes on repeat. I've lost track of whether I'm even enjoying myself - all I know is I must smash nut.

You've achieved a really satisfying "smash" feeling, and I think that's thanks to both the sound/screen shake as well as the low-stakes game play. It's great that you aren't penalized or anything if you miss a nut, so it's a really relaxing but also captivating game play loop. I love how the nut counter at the top end up just filling the entire screen - in fact I think i'd be cool if it literally did fill up the entire screen by the end. Also, this is the kind of game that can just go on forever. When I first played it I was convinced it was just an infinite loop that goes on forever, so it was a little jarring to see an end screen - let me smash nut for all eternity please and thank you.

I... cannot believe... you completed... the nut sequence.

You are a force to be reckoned with.

Hi Abby, this is really satisfying to play! I feel like the effect when the hammer hits the nut really makes me feel the pain the nut is feeling - I feel like I’m squashing a big bug. The music really matches the vibe perfectly. I felt like I was playing for so long that I just never expected it to end, so when the ending popped up I was like, oh huh! The hammer sometimes swings back and forth pretty erratically & unpredictably which can make it hard to get any nuts, but I feel like that’s probably part of the desired effect, so I actually think it works. Really weird game! 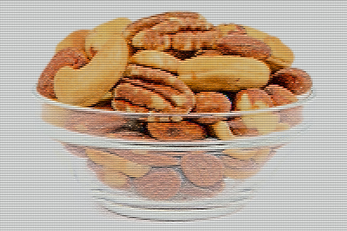